Be Afraid Of The Dark – An Interview With Tim Marquitz

Tim is also the brains behind Fading Light, 'an anthology of the monstrous' released this weekend by Angelic Knight Press. Fading Light features a stellar line up including William Meikle, Gene O'Neil and Mark Lawrence amongst others.

TM: Thanks, Lee. Appreciate you having me.

LM: We'll start with Fading Light. What can we expect from the anthology?

TM: Hopefully something different. I wanted an overall concept for the anthology, but I didn’t want to tie the authors’ hands to a single genre, and it worked. There’s science fiction, horror, and fantasy mixed throughout.

I’m also hoping for a consistency you don’t find in some anthologies. Because ff the tons of submissions I had, I was able to be picky and stuff the anthology full of amazing stories by writers familiar and new. Guess we’ll see if I succeeded come September.

LM: Where did the idea come from for the anthology?

TM: I really love the visual of the movie, The Mist by Stephen King. Everyone’s afraid of the dark at some point in their life, but the idea that there truly is something out there in the darkness we know nothing about is a fear that never quite goes away. I wanted to tap into that.

LM: Do you have a favourite story in Fading Light? Would you tell me if you had?

TM: I do and I won’t. J Each of the stories resonated with me or they wouldn’t be in the book. I had a lot of different options for Fading Light, and I was fortunate to be able to choose from such a great pool of stories. In the end, I love them all.

LM: What was the biggest challenge in putting together an anthology you were proud of?

TM: It really was trying not to piss off people I knew whose story just didn’t work. I had enough stories, and then some, for the anthology, and I wanted each story to be a perfect fit, not an almost perfect fit. I had to say no to stories that were great, by great authors, which simply didn’t work for me. 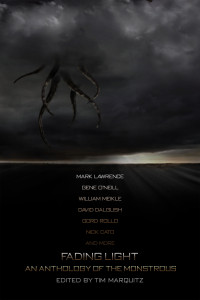 LM: Away from Fading Light, 2012 has been a busy year for you. You also have Prey / Anathema due in September from Genius Book Publishing. What can you tell us about it?

TM: Prey and Anathema are two novellas I wrote last year and sold to Genius after Steven Booth (author of The Hungry) invited me to submit at last year’s Killercon, in Vegas.

I’ll quote the cover artist, M Wayne Miller (who does amazing work, by the way) because his reaction to the stories is perfect:

"...while the two novellas [Prey/Anathema] are incredibly intense, they are superbly written and have strong storylines that transcend the shock. Anathema...has the essence of the old Twilight Zone series, updated and more shocking. Prey...is a dark police investigation story a la Seven or Silence of the Lambs, but freakin' horrifying in its stark portrayal of murder."

Thanks, Wayne. Couldn’t have said it better myself. J

TM: The Demon Squad books are all premised on a world where God and Lucifer called a truce and left the universe behind to fend for itself. The main character, Frank Trigg, is the nephew of the Devil. He’s a perpetual underdog in a world of supernatural threats.

While the first three books in the series are written with more epic storylines, Echoes is a bit more of a personal book for Frank in that he is forced to learn some things about his past he wasn’t quite ready to know. In a lot of ways, it’s a set up for book five, which really ups the ante in terms of chaos.

TM: I’m a repressed overachiever…what can I say.

The Blood War Trilogy was my attempt at writing a more epic style of fantasy. I’m not really sure I succeeded, but I guess in comparison to my other books it is pretty epic.

I think the BW books are written in a more classic style, the prose and storytelling more like the books I loved as a kid mixed with a grander scale concept like George RR Martin’s Song of Ice and Fire, though don’t think I’m comparing the two. It definitely isn’t Game of Thrones.

As for book three, now that I finished the two short stories ahead of it, I’m starting work to finish the trilogy. The hope is to have it out by November of this year. We’ll see how that goes.

LM: Do you think there's a trend in authors choosing to write a series rather than a standalone novel? If so, why do you think this is?

TM: To be blunt, series are more marketable. While an author can write great standalones, there’s no guarantee a reader will come back again. With a series, once you have a reader invested in the characters, they want more. So, from a purely promotional point of view, series are where the money is.

I also think authors fall in love with their characters. When you sit down and create someone you really want to spend time with, cutting them out of your life after one book sucks.

TM: The series format allows me to come back to a world over and over that excites me, and that’s great. That said, a series requires me to keep track of all the crazy crap I think up so I don’t screw the pooch in a future book.

Shorter works are more intense for me. I love the one and done feeling sometimes, getting in and telling a story with less commitment. Then again, when you write a short piece, you’re so concerned with telling a complete story you close off the world and it’s hard to come back to it if you want.

LM: What is the best piece of advice you could give another writer?

TM: Absorb everything. No one is perfect, so every time someone says something about your work, seriously think about it. You might not change anything, deciding that person’s opinion isn’t right for you, but always consider what they’re saying. A lot can be learned by listening.

That and practice. The more you write, the more you interact with the written word, the more you learn about it. Write until your fingers bleed, and then write some more.

LM: In general, as a reader what do you think good writing is?

TM: That depends. Sometimes I’m content with subpar writing in the mechanical aspects if the story is engaging, and sometimes I hate books that are written flawlessly.

Enthusiasm goes a long way toward making average prose entertaining. At the end of the day, I’m not judging a book by the rules but by its ability to entertain me. A book I finish is good writing.

LM: Your Kindle (or generic non-branded e-reader) is broken and you can only have one book (not your own!) on there. What would it be and why?

TM: Honestly, why would I want to read my own work? I’m sick of the crap.

Otherwise, I’d probably have something like the Great and Secret Show by Clive Barker, or perhaps Imagica. I can read Clive’s books over and over without tiring of them. 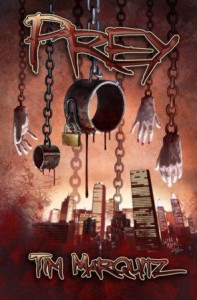 For More on Tim Marquitz go to http://www.tmarquitz.com

You can buy Tim's books here on Amazon.